Flaky pie crust is the key to a delicious pie! However to achieve such a thing is very strongly debated! Egg or no egg? Butter, lard or shortening? Depending on who you talk to you will hear lots of differences in opinions.  But today I am going to share a tried, tested and truly delicious homemade pie crust recipe, that goes perfectly with every type of pie.

I have received countless complements on my crust. Even people who had no idea I had baked the pie would say that it was the best pie they had ever had! Try this recipe and you will not be disappointed.

First thing you need to do is check your pie recipe and see if you need a double crust or a single crust. Pies like pumpkin, pecan and lemon meringue only need a single crust because there is no top crust. Most fruit pies all have a crust on top so you will need to make a double crust.

Many people say they can’t make pie crust. it is one of those things that can go horribly wrong if you do not follow the directions closely.  When making pie crust it is not the time for a adding a “dash of this” or not measuring out the ingredients.  I am including LOTS of photos in the post so you can see step my step what you need to make amazing homemade pie crust.

There are four ingredients to this pie crust.  Yep that is all you need to create the base of a tasty homemade pie.  The ingredients are all purpose flour, salt, shortening, and ice cold water.

Shortening: This is the most controversial part of the recipe. Some people swear by all butter, all lard, all shortening or a mixture. For me I have found shortening to always have incredibly flaky results that do not disappoint.

Water: Make sure that you use very cold water. I usually put cold water in a bowl and add some ice cubes.

How to Make Homemade Pie Crust

Here are the directions to make the pie crust, keep scrolling down the post for the volumes needed.

Carefully measure out the flour and then mix in the salt.

Next add the shortening. To blend the shortening you will need to use either a pastry blender, a fork or two knives. Mix only for a couple of minutes until the shortening is in pieces that are the size of walnut halves or peas.  Do not over mix it. The biggest key to making flaky crust is to NOT overwork the dough. You want to keep the shortening from being completely mixed in.

Press the crumbly mixture together to form a ball, two balls if you are making double crust.

Place a piece of wax paper on a clean counter. Put the ball of dough on the wax paper and gently press the dough out into a small circle.

Cover with a second piece of wax paper and roll out with a rolling pin. You will want to make a circle that is approximately 11-12 inches in diameter. I usually just place the pie plate onto the crust to see if it is large enough. You will want at least an inch or two bigger than the pie plate.

Fold the overhang under itself to make it double thickness and pinch it together. Go all the way around the edge until you have folded it all under and pinched it together to make a somewhat uniform edge.

There are several ways you can decorate the edges. Here are three examples of different types of edges for single crust:

You can use a fork to press the edges.

A second option is pressing the crust gently between your thumb and index finger to make large waves.

The third option is my favourite. I gently pinch the dough between my thumb and index finger to make small peaks.

When the crust bakes it puffs up quite a bit. So don’t worry about making it look perfect because when it comes out of the oven it will look quite a bit different.

Bake according to the pie recipe.
Recipes like apple and pecan call for an unbaked pie crust. The crust will bake at the same time as the filling as a complete pie. Pies like lemon meringue call for a fully baked pie crust before you add the filling. And others like pumpkin call for a partially baked crust. This is usually for a custard type pie filling. Partially pre-baking it will help the crust from becoming soggy.

If your recipe calls for a pre cooked crust prick the crust with fork and bake it at 425 degrees or until it looks flakey and golden brown. Sometimes the crust falls into the pan as its is cooking. To prevent this from happening press tin foil onto the crust and fill with dried beans.

It may take a little while longer to cook this way but it is well worth it. I wanted to see how my crust would hold up without the beans and tinfoil. It fell in quite a bit. Here are two pumpkin pies. One I used the beans and foil and the other I didn’t use anything. The pie held almost half the amount of filling and looked quite lopsided. 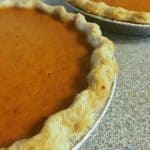 For a double 9 inch pie crust adjust to the following:

I hope you enjoy this recipe as much as I do. Pie never lasts long around here!