For the past few months we have been taking part in a produce box program run by the Eden Community Centre in Mississauga.  It is an awesome program where you can place an order for a box full of fresh produce as a really reasonable price and then pick up from their centre on Fridays.  Taking part has meant we have a fridge stocked full of fruits and veggies to help make sure that we are eating our 5-10 servings a day.  Now in these boxes you don’t get to choose what you get, which I try to look at as a challenge, not a draw back.  Recently we received leeks in our produce box… I have never, ever cooked with leeks before so what was I going to make?!?  I have had leek and potato soup before, but Hubs was not in a soup kind of mood.  So instead looked around for leek recipes and I adapted a dairy goodness recipe to create Cauliflower Leek and Bacon Casserole!

I really enjoyed the Cauliflower Leek and Bacon Casserole and it was a great way to introduce the boys to leeks for the first time.  You can also adapt this recipe to what ever cheese you have at home.  I think I am going to try it with cheddar cheese next time. Here is what you need to make this tasty dish 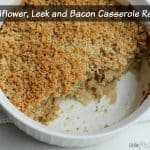 Bacon just makes everything better, and it is a perfect fit in this creamy casserole recipe.  And don’t worry if you don’t finish it in one sitting, as it reheats well and is just as tasty the next day.  Now I am looking forward to my next vegetable “challenge” in my produce box, I wonder what we will get next week.

What is your favourite way to eat leeks?

Asparagus with Lemon and Mint Recipe