The most difficult part of being asked to try out the new Maple Leaf Portions Bacon was deciding which recipe to make.  They all looked so good, I have made Bacon Waffles before and they are delicious so I decided to try a pasta dish this time.  The Rigatoni All’Arrabbiata looked amazing, but I was worried it might be a little too spicy for Monkey to eat, so here is my adaptation: Tomato Bacon Pasta. 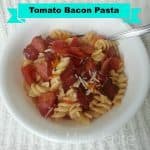 This easy pasta dish was quick to cook up and the leftovers were just as tasty 2 days later as they were on the day we made it.  And don’t be alarmed if your kids pick out all the bacon and eat it first, that is just what my little guy did too but once the bacon was gone he did eat the pasta too!

Disclosure:  I am a member of the MLF Connects Program.  As part of my participation in this program I have received compensation, however all opinions and ideas on this blog are my own.